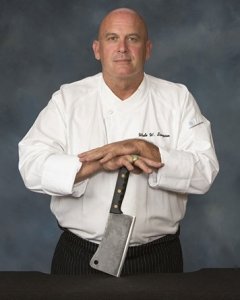 Chef Wade Simpson has been in Phoenix since he was 6 years old and the kitchen since 13 years old.  As he worked his way up through the ranks starting with washing dishes in a little kitchen downtown, he found a natural connection with the kitchen.

He began to notice an organized chaos and comradery present in culinary teams on the line and he knew he had found his happy place. Once he made his way up to the line, Wade began to thrive in his new found beginnings. After discovering that he wanted to be a part of “the dance of the kitchen” as a career, Wade applied to The California Culinary Academy for formal training.

Upon graduation in 1985, Wade spent his next several years working in various hotels across the country, including Doubletree Hotels, Westin, Sheraton Grande, Ritz Carlton, The Inn and Links of Spanish Bay and Caneel Bay Resort in the USVI. Wade returned to Phoenix in 1994. While with the Pointe Resorts, Wade created The Brew Masters’ Dinner, a multi- course dinner made from and paired with Micro brewed beers. Wade continued his career in the Phoenix area working for different restaurants and clubs until he began a dynamic career with Paradise Valley Country Club. From the beginning of 2003 to 2014, Wade cultivated a very successful operation at an exclusive private club in Paradise Valley.

For years I searched for my purpose in life. Part of it I knew was to be of maximum service to God and my Fellows, 15 years ago it came clear to me that apart of that purpose was the god given gift to be the chef I am, amongst a few other very important things. The gift to cook for people and loved ones is probably the best purpose I can have, many in my life enjoy this. To be able to cook for those that Love me and I of them is my highest wish.  – Chef Wade 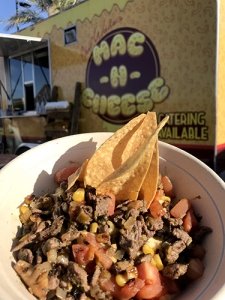 After years on the streets as Bistro on Wheels, Chef Wade decided he wanted a change of pace and with the wrap of the trailer, Chef Wade’s Mac’N’Cheese was born!  In true chef style, his mac is made from scratch and to order.  Put it in a fancy glass bowl instead of a paper bowl and it could be served in a fine dining establishment!  He uses his talent for flavor combinations to create an experience in each dish.

If you see the truck out and about, don’t miss a chance to taste one of Chef Wade’s creations!  He has graced the street food scene with incredible talent and deliciousness!

Looking for a Food Truck? Find the PERFECT one here!

Keep Exploring the world of Food Trucks! Where to next?

Need to contact the ArizonaFoodTruckCatering.com team?
Or would you like more information about adding your Food Truck to the site?