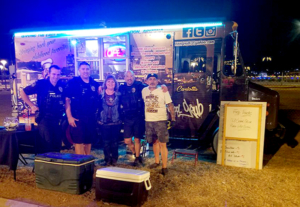 Frank and Carlotta Perla have a passion to bring a quality, old school burger and other comfort foods from the 70’s and 80’s to the community.

Frank’s culinary passion started at a young age in the kitchen with his grandfather who was originally from Chua wawa, Mexico.  Growing up in La Puenta, California, his grandfather taught him to cook the old school way – fitting as “Old School” later became Frank’s nickname!  His grandfather believed, as Frank does as well, that if you take your time and put your heart and soul into the meal you are preparing, everyone will taste the difference. 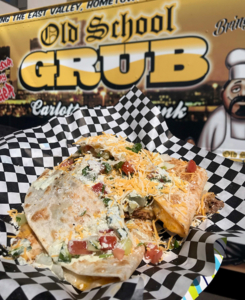 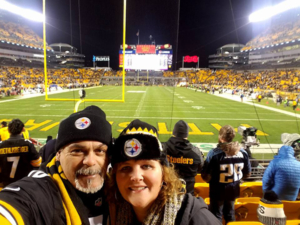 After a 35 year long career as a flatbed truck driver, a handful of surgeries forced Frank into retirement.  He decided it was time in life to do something he loves and cooking was the natural choice.  He couldn’t think of a better way to spend his retirement than seeing the looks on people’s faces as they taste his food.

Meanwhile in Nashville, Tennessee, Carlotta grew up with a passion for singing since the age of 3 and a dream of singing full time brought her to the Valley 20 years ago.  Along with being Frank’s right hand on the truck, she sings at over 100 nursing homes around the Valley and feels blessed to be able to touch others with something she loves.  She also hosts karaoke at several resorts around the East Valley.  While cooking is not her first passion, it’s not hard to see she enjoys being part of Frank’s passion as they get to make people smile together. 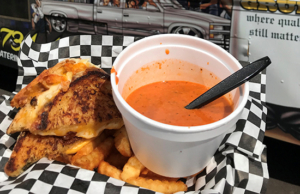 Frank and Carlotta have such passion that is visible when you meet them.  They came together in their love for the Steelers, their fur babies (9 dogs & 4 cats) and their passion for enriching the lives of those around them.  Stop by and say hi to them next time you see the truck on the streets and don’t forget to have them make you your favorite childhood comfort food!

Looking for a Food Truck? Find the PERFECT one here!

Keep Exploring the world of Food Trucks! Where to next?

Need to contact the ArizonaFoodTruckCatering.com team?
Or would you like more information about adding your Food Truck to the site?